Do you know what makes a good béchamel sauce? A bit of blue cheese. Not too much to be overpowering but enough to make it’s presence felt. Of course this is not news to anyone with rudimentary culinary skills. A basic white sauce is, well, just that: a base from which many moods and flavours evolve. But it is news to me.

“Bicycling through Time” is a book by Paul Farren about his collection of antique bicycles. He has over 200 stored in a warehouse in Melbourne and he gives an outline of about half of them (I count 94) in this fabulous book. If history informs then there is much to learn from Mr Farren’s collection. 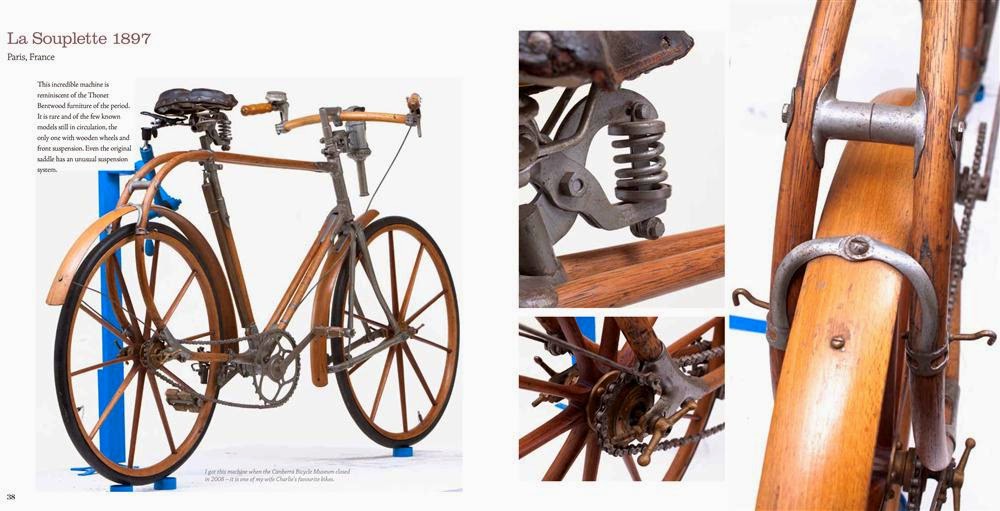 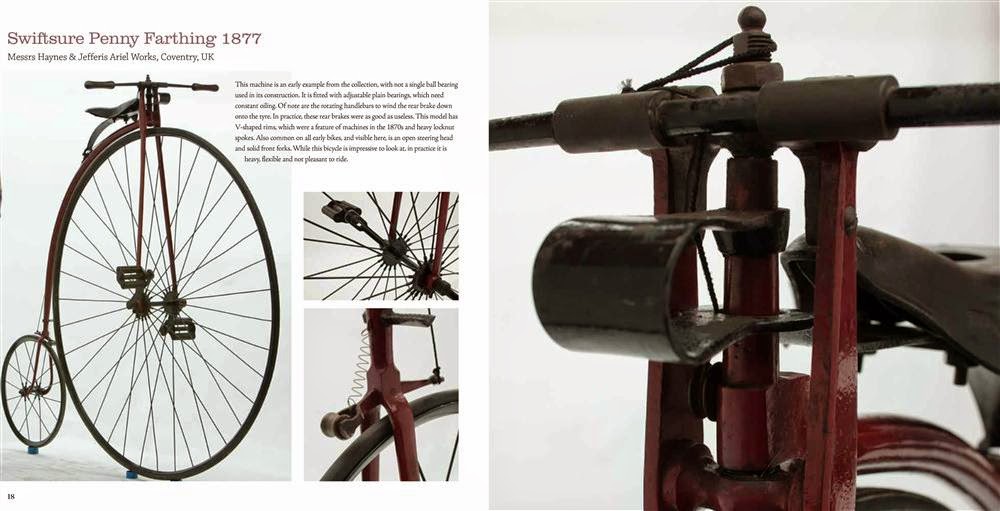 A compendium of very nicely shot pictures (and a picture book is my most favourite kind of book) encourages the reader to flick back and forth through the pages rather than follow a singular narrative from front to back. And it got me to thinking about how this differs from opening several pages at once on a digital screen. Say, for example, when referencing bicycle images stored on my hard drive (lots) to those accessible through the internet (uncountable). It’s different. And palpably so. At least for a brain wired up before the rise of computers and the internet.

Like the clay tablets they replaced, a book has presence and purpose. A robust physicality made just to deliver that quarry of information bound between the covers. Computers and their kin (electronic tablets, smartphones, some smart appliances like fridges and washing machines) also have presence but increasingly serve as an interface for accessing data stored elsewhere on the internet. And they do an awful lot more than tell a story. If a book is like a painting, a computer is like a window... a window with which we can organise our life,  check the time, watch movies, and play Battlefield 4.

There has been much written about how computers and the internet (and the arrival of virtual social networks) change the way we think and act. I hunt my brain for references to allow me to understand. 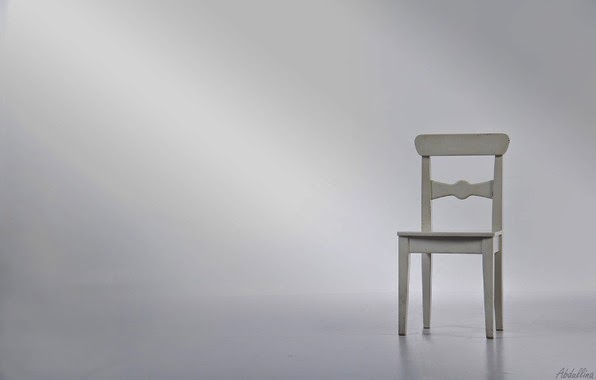 (the chair is on loan)

I clear my desk, switch off the computer, put Mr Farren’s book back on the shelf, and go for a run. For running allows random thoughts to jangle around and occasionally they congeal into a more-or-less coherent narrative. And I come to the realisation that I am a hopeless runner. Despite all the hours spent pounding the pavement. And, despite all the years spent accumulating bicycles, that I really don’t have anything that someone might consider putting into a book. But I do have two bicycles that carry a consistent theme in that they are both Australian-made track bikes. A 1940s Speedwell Deluxe previously posted here. And a mid 90s AIS/RMIT Superbike with 700c wheels front and back (a design that never made it to proper production) previously posted here.

Put them together on the same page and we have this: 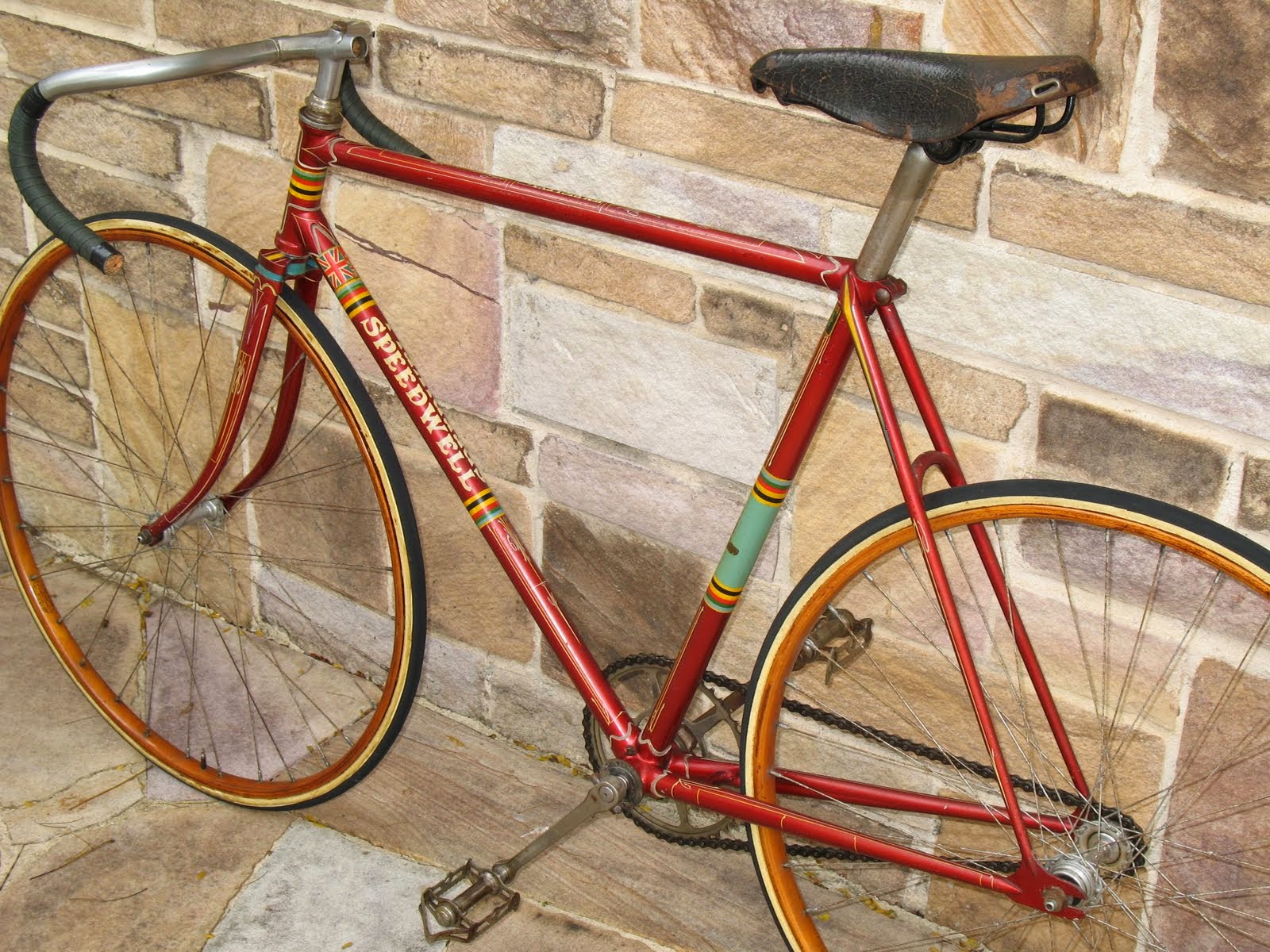 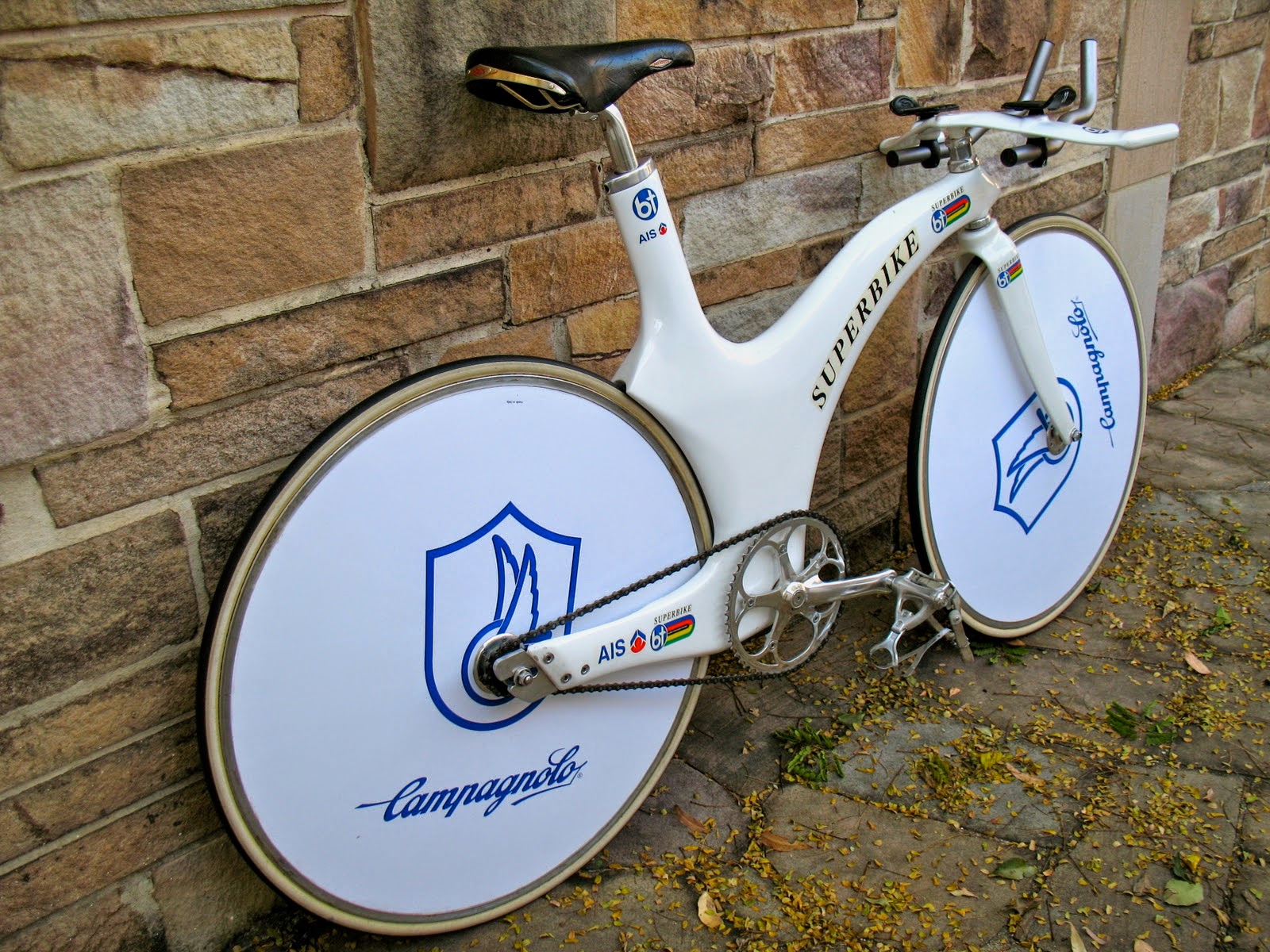 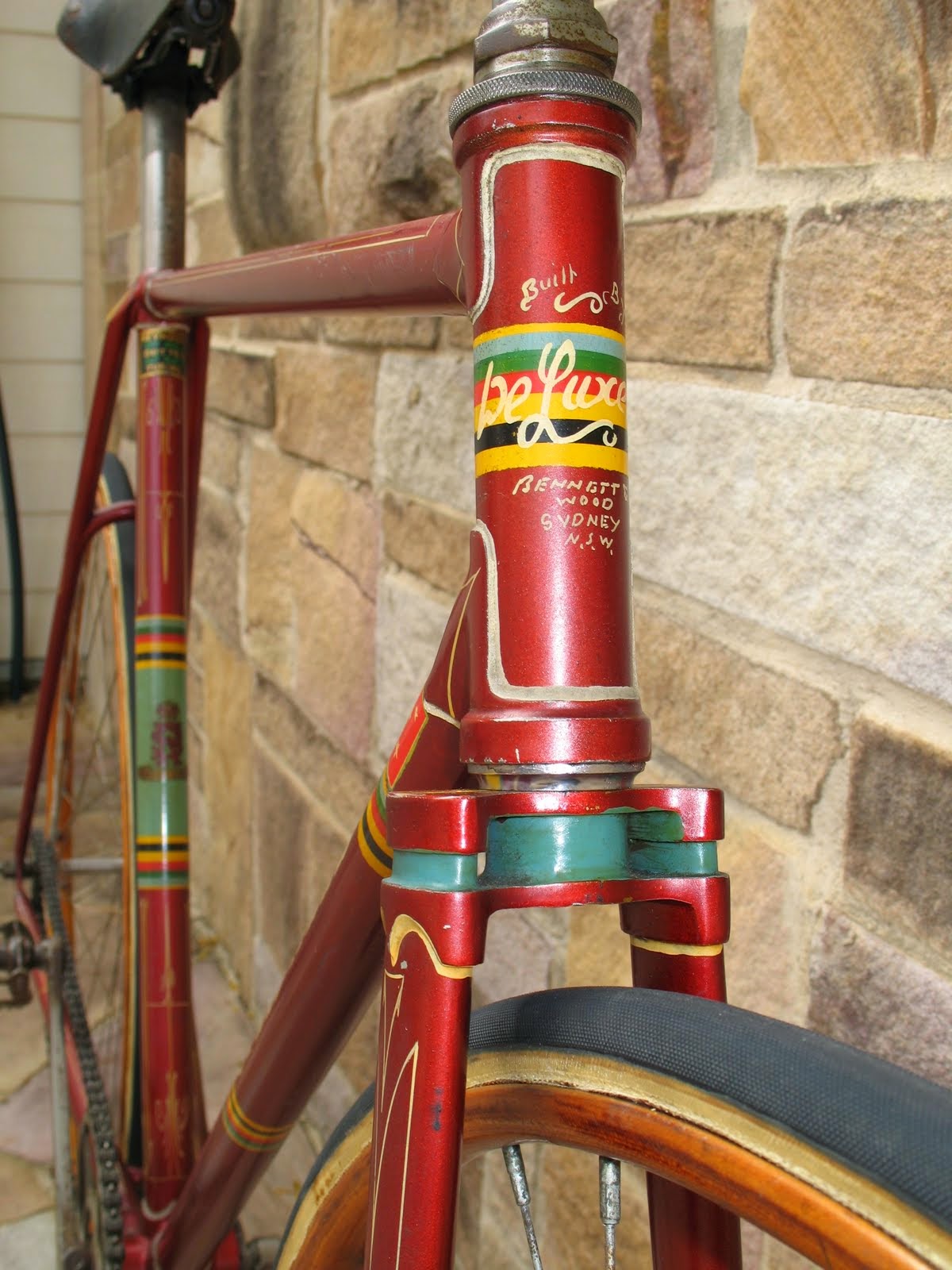 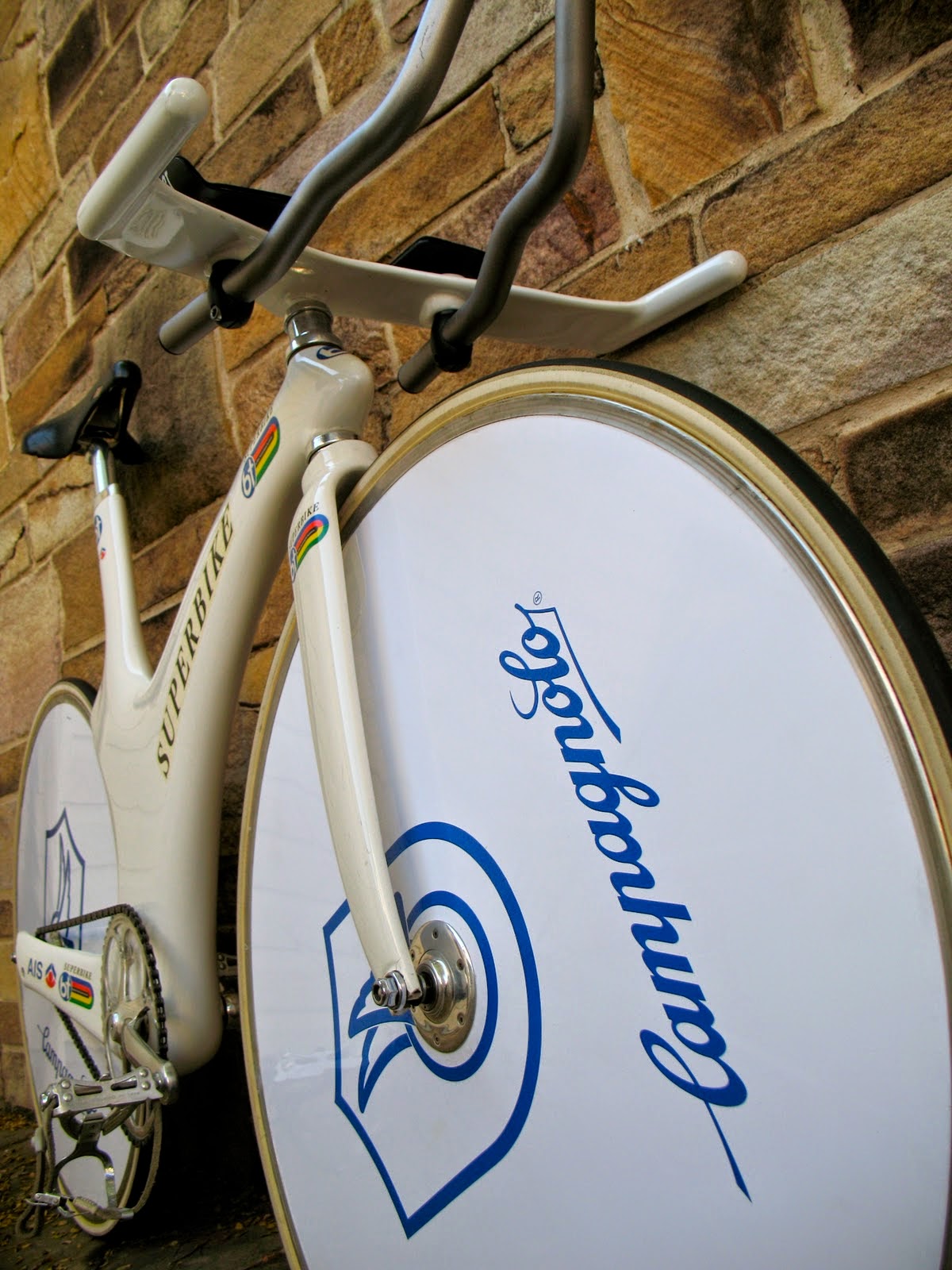 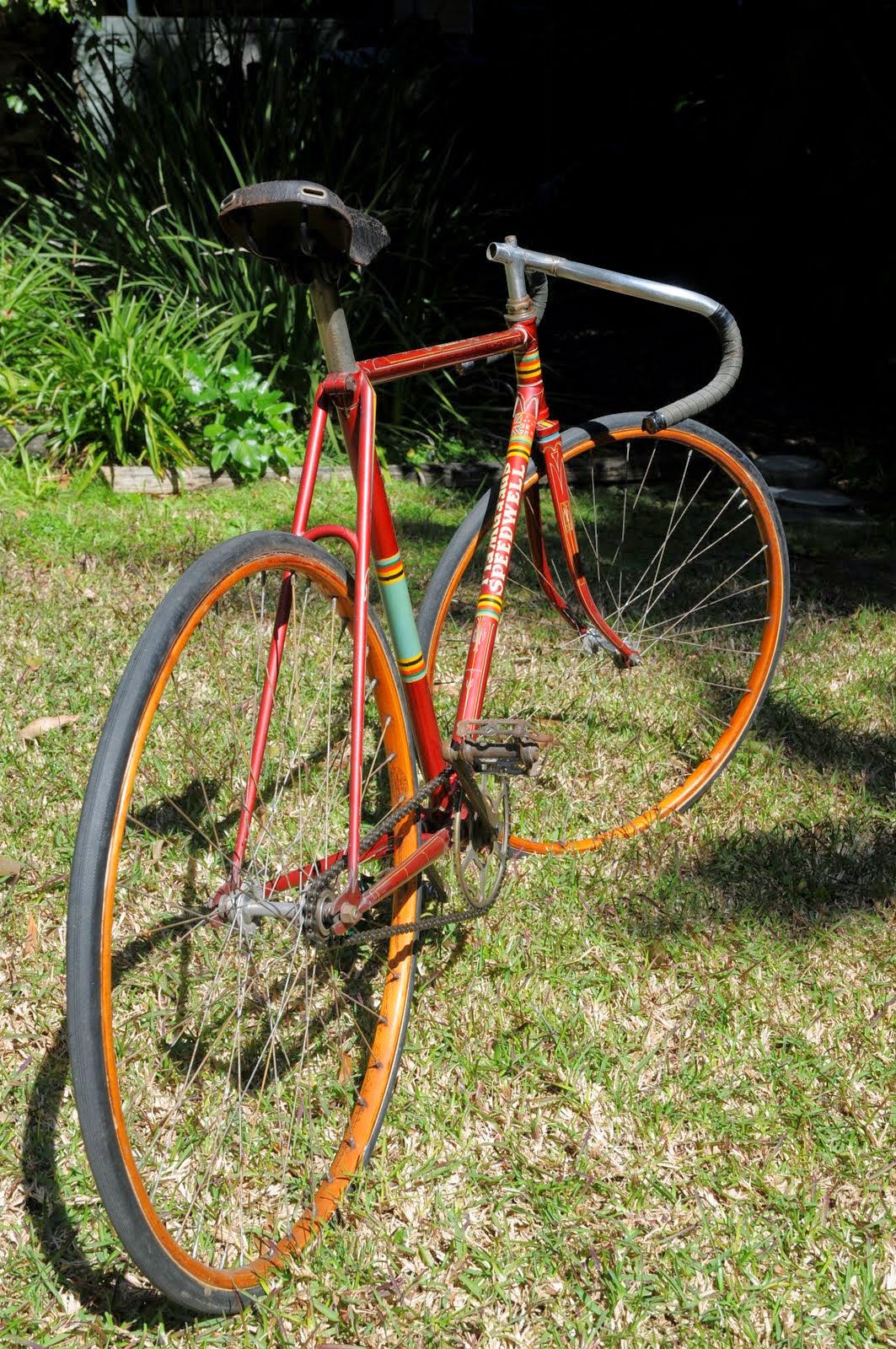 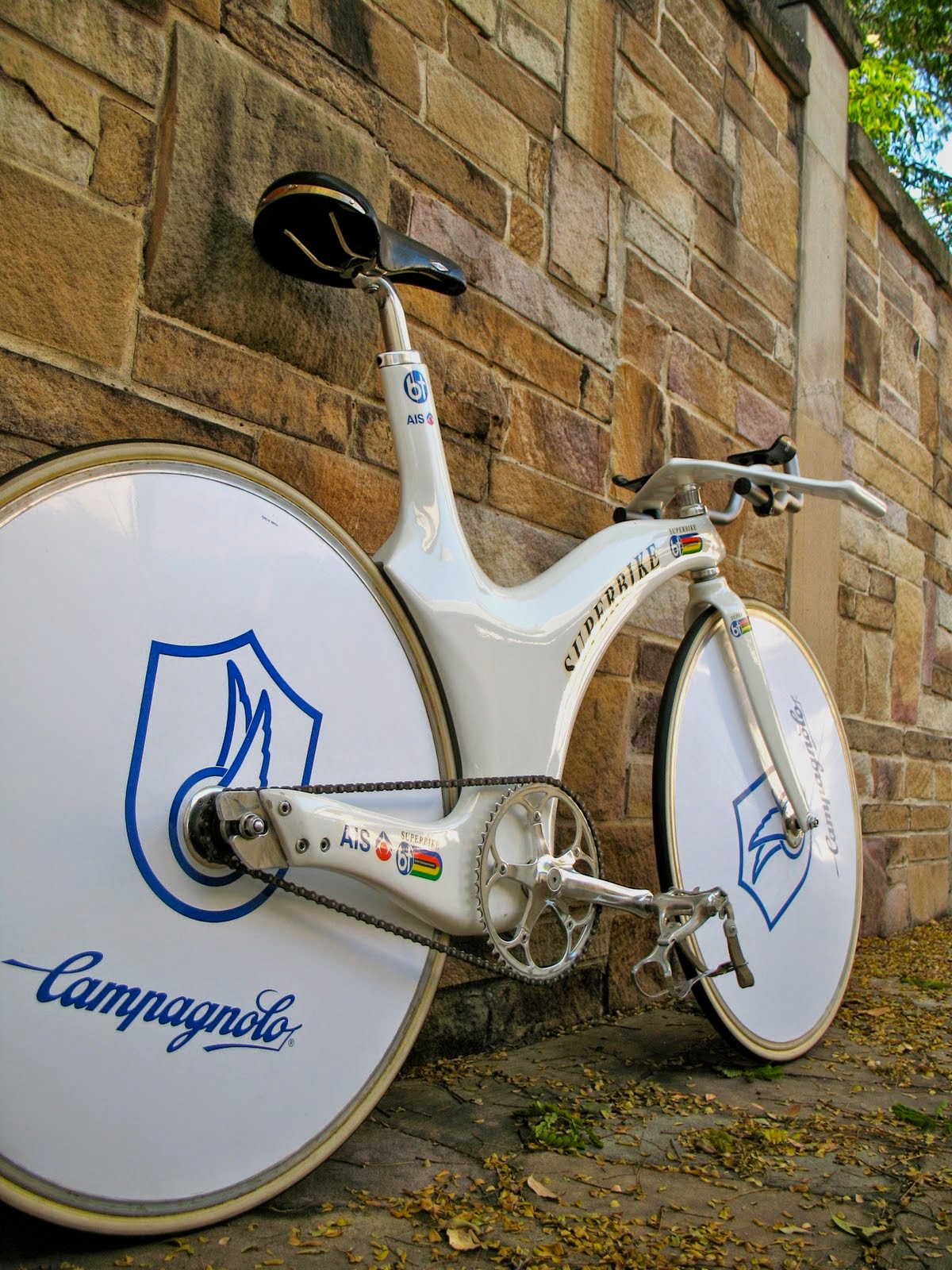 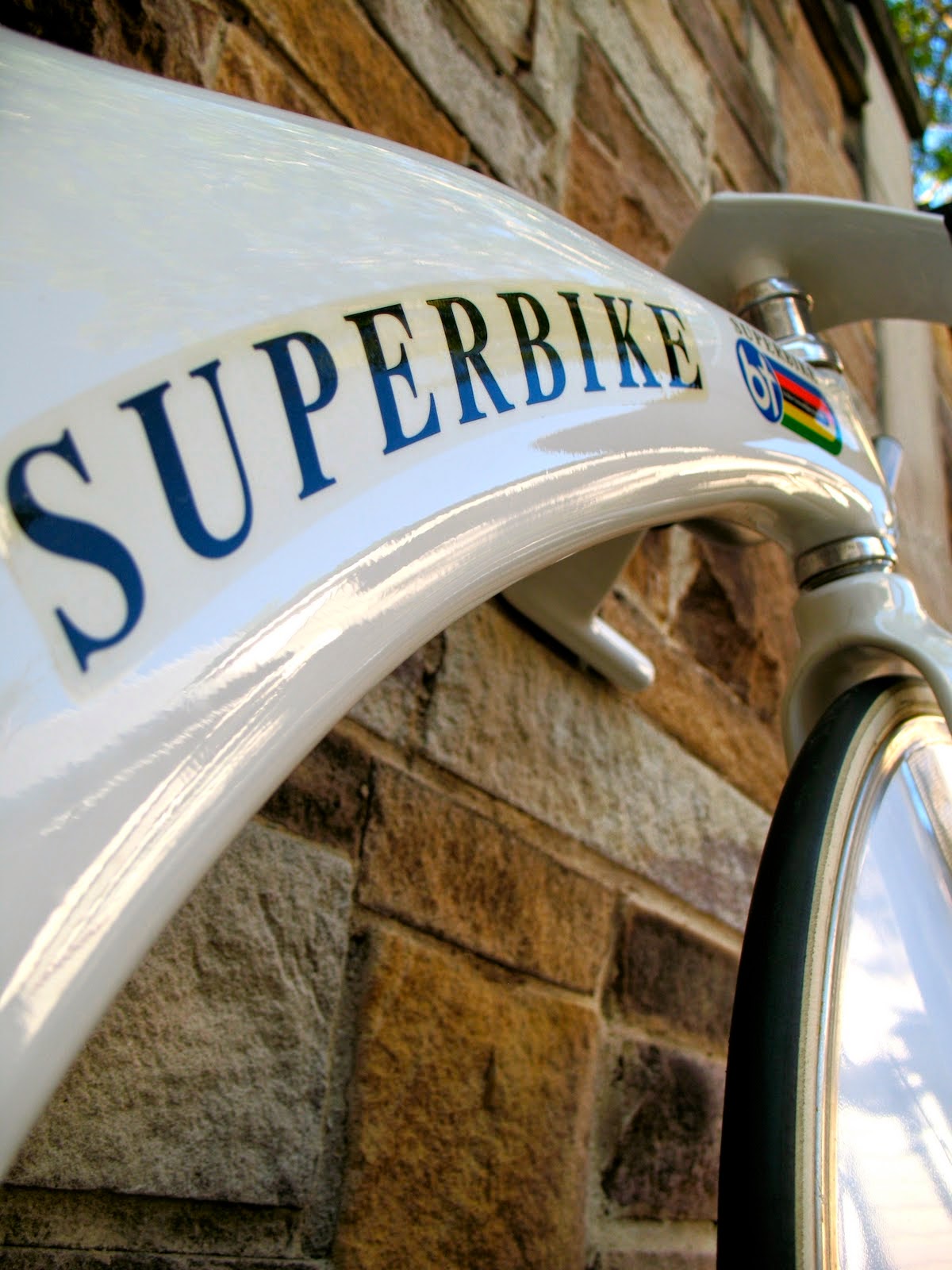 For those that might have expected more, I apologise for ripping these photos straight off their respective posts. Mainly because setting up a camera to take more mediocre photos of a couple of bicycles that I have already photographed is a step beyond my enthusiasm for such things. But also because I want to make a point.

Putting the images on the same page presents a different perspective of the same information. Both bikes represent the pinnacle of what was available in track racing for their time. Both (to my eyes at least) are nice enough on their own. Looking at them together shows what a difference 50 years of bicycle development makes. A similar theme (Australian track bikes) with a different emphasis (change in technology).

This is why the Farren Collection is important. There are plenty of bicycle enthusiasts out there with collections that are interesting, expensive, focussed or just plain whacky. Collections reflect the quirks and desires of their owners. There are only a handful of bicycle collections as universally significant and as comprehensive as what Mr Farren has amassed. A collection like this outlines the early history of bicycles with the inclusion of a (very) substantial number of important designs. But bicycle collecting isn’t rigorous discipline like, say, palaeontology. And so it shouldn’t be. Palaeontology is a well-connected field of science where material and information from all over the world gets shared to create a knowledge base: a universal understanding which serves as a foundation for further research. Although there are a number of books written about the history and evolution of bicycles, a large portion of the actual specimens lie disseminated and fragmented around the world. And each has a story to tell. Great stories as they are, they form a hodgepodge of information, conjecture, supposition, and misinformation (this blog included).

A comprehensive collection like Mr Farren’s brings the written history of bicycles (or at least a significant portion of it) to life. And grounds it in reality.

Not that the whole palaeontological timeline for humans is anywhere near complete either. Just as we come to terms with the fact that Homo sapiens interbred with Neanderthals (and their genes live on within us to varying degrees) we are now told that there is another entirely different lineage of hominids, the Denisovan, that lived around the same time as modern man. And that we interbred with them as well. And, get this, anthropologists now think that there were also other hominids hanging around that we don’t yet know about as their remains are either not yet discovered or in some dusty drawer misclassified as something else. And, guess what (the theme continues), our ancestors probably interbred with them too... Good God. If man was made in His image, it now appears that He didn’t choose to make him the discerning type.

Back to the Farren Collection. Hopefully a collection as significant as this will stay together.  And be open for public viewing either on its own or, better still (for a wider audience), on display in the transport or technology section of a larger museum. A collection of individual specimens allows a clearer perspective of the whole. Losing a collection like this to small private buyers would be a shame. The amount of coin required to bring together such a collection in today’s market is not insubstantial. The value of having a knowledgeable, determined, persistent and resourceful collector is unmeasurable.

Back to my original question. I think most people agree that it doesn’t really make a big difference whether we get information in the quaint aliquot of a book or through the flowing stream of the internet. A book with a stamp of authority sharpens the focus. It’s probably a little easier to lose our place and become distracted when surfing the net. But humans, some  more so than others, have always attended to distractions whether they be based in the real world or otherwise. Sometimes it is easier to blame technology (and society) for failings within ourselves.

Twenty three years ago I visited the Natural History Museum in London. I spent many hours there. A small, enthralled observer wandering the display cabinets containing the collated nonliving and once-living things of the world. Lost, bewildered and excited by the sheer volume of stuff. A few years ago I went back and saw that much of what is displayed takes on a digital format. Clear, directed, and far less cumbersome. Like many museums throughout the modern world the NHM takes a multimedia approach to enhance many of their displays. It captures the imagination by focussing the interest of the viewer. It's not the same. It is wonderful.

Museums like the NHM and collections like Mr Farren’s makes my world bigger and better.  An ability to focus leads to learning and knowledge. But rummaging around, wandering aimlessly or just getting lost isn’t altogether a bad thing. Spinning around in a world that is too big to fully understand is disconcerting. But recognising and embracing that fact can, paradoxically, help us choose where we place our feet.

Do you know what makes a good béchamel sauce? A bit of blue cheese.