Somewhere between the full leather saddle and the plastic-shell, leather-covered saddle is the Unicanitor. Developed (or rather, acquired from Nitor) by the ever-innovative (or should I say master-facilitator?) Cino Cinelli in 1962 this was the first of the plastic saddles. And a nice example of technological evolution. This early version has the saddle-tensioning bolt needed for full leather saddles (which sag with use over time) but quite redundant for non-stretch plastic. Cute (interesting but superfluous) in cyclocentric sort of way. 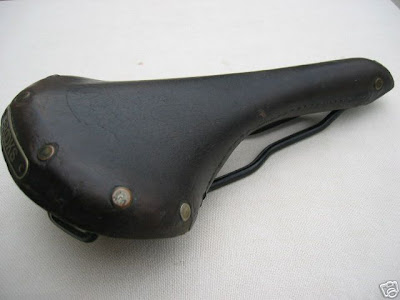 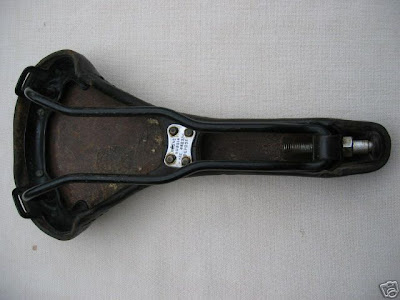 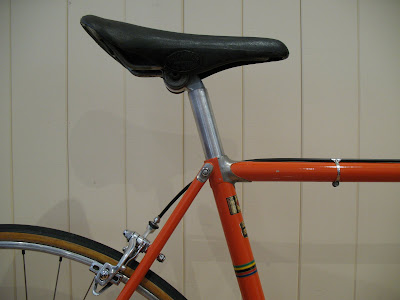 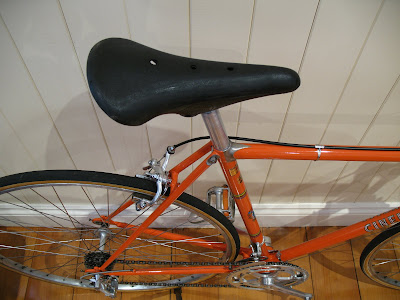 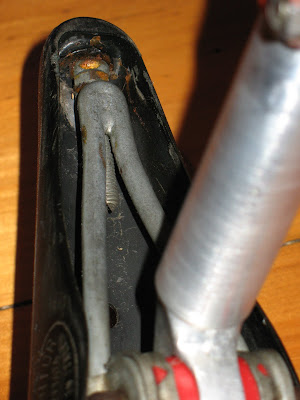 1968 Campy Record brakeset on a pre-1965 Cinelli SC with is ok. Quirky repaint leaving the original chrome and wrong SC decal with unusual arrangement on the seat tube is a little more provocative (even for me).
Posted by wingnut at 8:12 AM No comments:

An opinion on being "period correct"

Not many would argue against the modification of a classic bicycle that has required restoration. What about the bicycle that arrives with original paint and components? Most collectors would prefer to keep them in the original condition. And the bicycle that has been modified in some way over time? Some take great pains to return these bikes back to their original condition often with deep commitment, boundless resourcefulness & a great deal of time. Bicycles that have sentimental value or are regarded as iconic tend to have such lavish treatment.
However bicycles are functional items and, with ownership, develop their own individual history. Things get changed and added to make the bicycle suit the needs of its owner. The collector's tolerance to this varies not only based on his attitude at the time of the purchase but also on his attitude which may change over a period of time.
I like to collect bicycles and I tend to focus on bicycles that I had some yearning for in my younger (and thus poorer) days. They reflect my aesthetic leanings more so than being strictly "period correct". In many cases the bicycles are pretty close to period correct simply because old components go well with old frames. Here are two examples. 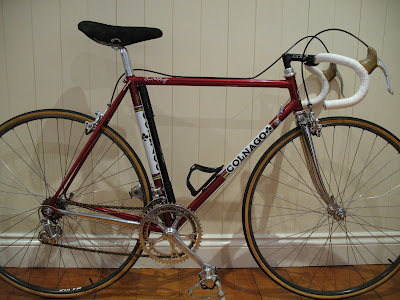 This is a replica of the bicycle that Saronni rode to the World Championships in 1983. The frame differs in that the rear triangle has not got the exposed 3/4 chrome reflecting a more modern (less chromed) look. Attached is a more modern Colnago signature stem which IMHO is more suited to match Tullio's signatures on the Campagnolo 50th groupset. The old & poorly applied & shellacked cloth tape has been replaced by a Fizik white perforated tape which complements the frame decals nicely.
I then took this one step further with application of a Colnago signature decal directly on the original, unrestored paint. Big move (in this little world of bicycle collecting) as this bike can now never return to original condition - the Mexico's renowned flaky paint would preclude any attempt to remove the decal. In my defence I agonised over this decision for some time but the decal suited the frame and components perfectly and aesthetics ruled over future sales value. In any case the signature decal came out on the Colnago Masters a couple of years later (ok, it's not an excuse)


In the end there are other Saronni replicas out there and this is but one example. If I was fortunate enough to own Saronni's actual bike then (of course) no modifications would have been made. 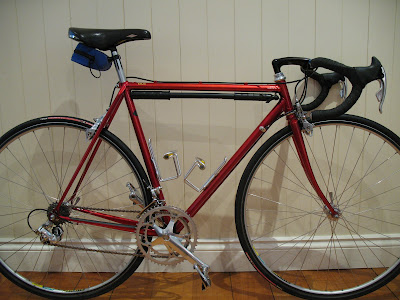 This was my race bike between 1991-1997 and it has been a passionate affair. It came in fluorescent orange (fluorescent was definitely the mood of the time) and with Shimano 600 components. During my ownership it got repainted as a more sedate metallic dark red, a Chris King gripnut headset (expensive now but phenomenally expensive in the early 90's - and this is pure class without the multiple logos that now adorn King products as well as everything else...), 125mm ITM stem & bars, Mavic open 4CD ceramic rims, and a gorgeous 1993 Campagnolo ergopower Chorus groupset (I lusted for the achingly beautiful 1992 Record ergopower groupset with requisite delta brakes - developed just one year after Shimano came out with their revolutionary STI brake-shifter - which was always kept in a glass display cabinet so kids like me could not get their grubby, sweaty, trembling-with-desirous-intentions hands on them).
Since I've stopped racing, I have replaced the Chorus crankset for a NOS item and the pedals with the glorious ICS-modified Look pedals.


My comment here is that no-one, including most astute collectors, would blink about the changes on this bike. And it would garner hardly any attention at an auction website. However, it is a remarkably good racing bicycle and incredibly hard to come by. This is despite big companies like Tommasini, Basso & Somec having bicycles with MS tubing in their line-up and they were advertised quite heavily around the 1990's. Admittedly these companies are also now regarded (wrongly) to be a rung lower than say Colnago, De Rosa or Merckx of the same era.

Some background info is order here. Columbus only made Multi Shape tubing (cyclex tubing in the same family as SL/SLX/TSX) for a few years before it was superseded by Columbus EL (nivachrome tubing). Designed by Gilco (an offshoot design company run by Gilberto Columbo - Angelo Columbo's son - who also designed the pinched tubes of the Colnago Master as well as being involved in the designs of Ferrari & Maserati) every tube is a different shape to counter the torque forces generated from cycling. They rode remarkably well and had excellent reviews from cycling journos of the time. Alas MS was before its time and never really caught on. However, take a look now at current bicycle tube shapes and see the legacy that MS has left.
Because of their obscurity these bikes are, and will always be, great barn finds. And because of this low appreciation, customization of all sorts tends to be well-tolerated (by those that know or even bother to care!).


Sooo... Over a period of ownership (and use) a bicycle develops it's own individual personality that makes it wonderful in a way that makes it different from any other bicycle. The collector's tolerance to this can determine the selling price but often no more so than say, the size or colour. Exceptional bicycles (by that I mean those with with significant provenance) may well require exacting specifications for the period that they were ridden to fame. But even these bicycles often had changes from the standard ware. And in these cases interest and commentary about the whens & whys elevates and enhances the interest rather than serve as a distraction. Fickle business this bicycle stuff.


One final note. I have started a collection of parts to build a bike from a mix of old and new components. It will be the antithesis of period correctness and indeed the antithesis of the somewhat refined aesthetics of the bicycles in my collection. An exercise in aesthetic coordination and mixed component compatibility or simply a breathtaking waste of time and energy, we'll see ...

Posted by wingnut at 7:00 AM No comments: