Campagnolo delta brakes are simply the most beautiful if flawed brakeset in the whole of bikedom. They appear to have come in 5 incarnations with the first generation appearing at a trade show in 1984 then debuting in the Record C groupset in 1985. Unfortunately, even in their final incarnation, they offered little modulation, were difficult to adjust, and often squealed under load. And they were heavy! Many club riders shunned the top end caliper for the lower tier Chorus monoplanar brakeset or the still-available Super Record. This was in part due to them being exceedingly expensive but even top pros like Sean Kelly shunned the deltas. By 1991 they were hopelessly outclassed by Shimano’s dual pivot brakeset and subsequently dropped by Campagnolo the following year.

In my opinion the 1st generation delta caliper is the most aesthetically pleasing brake caliper ever made. That brakeset, along with the 1st generation Campagnolo Record C crankset are icons and highly prized among bike collectors. The calipers have the engraved logo, and the body is slightly smaller & more curvaceous in profile when compared to the later generations. A quick release is incorporated where the brake cable enters the body which is relocated to the lever in later versions (and continues in the Campagnolo range today). The brake blocks are brown and, like the body, smaller than those of later versions. The calipers are hand polished in every nook and cranny, even in areas that can only be seen with the brake removed from the bike! What is harder to appreciate in pictures of the 1st gen deltas is that the polish has a satin sheen giving a warmer glow than the later 4 incarnations of the delta brake.

The 1st generation brakeset was recalled by Campagnolo apparently because of failure of the locking hex nut. However I suspect the quick release wasn’t too reliable either as the cam mechanism slips a little too easily under load which could have been a problem… Campagnolo replaced the deltas with the Cobalto brakeset for a year whilst they sorted the problem out. Because of the recall, there are very few 1st generation brakesets around (I believe it’s a couple of hundred) so they are the most coveted of the deltas. 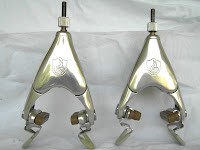 1st generation deltas sans quick release
The 2nd generation brakeset, like the first, had 3 internal pivots (excluding the fixing bolt) but the quick release was now on the lever. The brake cable enters through a serrated ferrule that allows for cable length adjustment. The cable is fixed using a nonstandard 3.5mm diameter hex bolt (the 1st generation deltas came with 3.0mm bolts) and the matching Campy-labelled allen key came with the calipers when new. The faceplate had the laser etched Campagnolo winged wheel logo and lost the retaining clip seen on the underside of the 1st generation caliper.
The levers allowed both aero and standard cable routing with a small (& fiddly) guide that slots at the top of the blade that redirected the cable back through the body for the “modern” aero look. As an interesting aside, the 1st generation deltas came with a frustrating hex head retaining bolt that made the aero set-up near impossible. Picture an Italian road bike in full first generation C Record regalia – the in-your-face cable routing seems out of place with the aero profile of the C Record group. Yet the overall visual effect works (to me at least). Later versions had an allen head screw. The Pentadrive adjustment screw (through an oval hole at the front of the lever) was introduced in 1988 and allowed further cable adjustment. Pentadrive was a nice touch but probably unnecessary (though it did make the delta’s a lot easier to adjust) and added weight. It was sadly lost on the final incarnation of the deltas.

The 3rd generation deltas retained the 3 internal pivots with the main cosmetic change being the tidier-appearing cable adjusters at the top of the body. They had a smooth profile with an O-ring and white-grey bellows to cover the adjustment threads. They apparently had internals that were more resistant to rust. 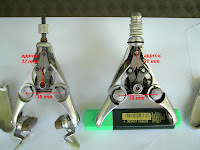 1st & 3rd generation deltas
The 4th generation deltas went to 5 internal pivots (excluding the retaining bolt) and were slightly bigger and heavier. Their performance was claimed to be improved because of this but in my opinion the deltas are a flawed design with poor modulation and the additional two pivots didn’t make much difference. As the brake pads come together the mechanical advantage increases because of the parallelogram lever arms. So the pads take a while to meet the rim then as further pressure is applied to the lever a smaller amount of cable pull leads to greater amount of pressure at the rim. In practice this means pulling the levers to bring the pads to the rim then maintaining control of the lever pressure to prevent the wheels from locking – not so easy if you are caught off guard. The 5th generation was essentially the same as the 4th with black bellows and black brake lever hoods (sans Pentadrive) to match the aesthetics of the day. At that time Campagnolo already had their version of the dual pivot brake in the pipeline and the deltas were on their way into bicycle folklore. 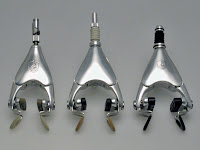 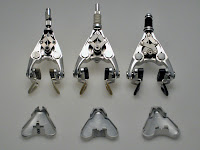 1st, 2nd & 5th generation delta's
(note the quick release on the 1st gen calipers)
Addit:
This article just describes the delta brakes found in the Record groupset. There were deltas in the Croce d’Aune group as well but they were not as well-finished with external leaf springs (behind the body) and a conical cable adjuster on the top. Let’s just say that they were not missed when Croce d’Aune merged with the Chorus group and retained the wonderful chorus monoplanar brakes…
Posted by wingnut at 8:24 PM 5 comments: