I distinctly remember one of my senior colleagues denigrating a disagreement amongst my junior colleagues as “a bunch of virgins discussing the finer points of sex”. Like the juvenile recalling his one half-baked sexual encounter I remember laughing a little nervously trying to give the impression that I knew a whole lot better whilst hoping not to betray my vast inexperience.
But we all have to start from somewhere. And they say that it is with patience and practice by which the neophyte becomes the master.
My appreciation of the lugged steel racing bicycle started in 1991. Not my first bike as I had dated several before her. But she was “the one”. That certain je ne sais quoi that drew me to her more so than any other bicycle before. Maybe it’s the bike. Maybe it’s the timing or the circumstance. In any case let’s just call her “the first wife”. 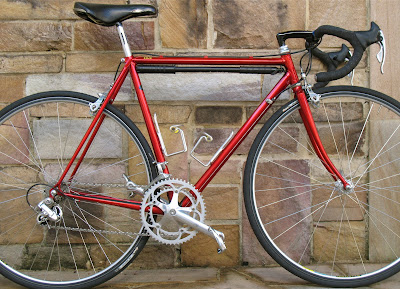 The first wife - or rather, how I would like to remember her
(she originally came equipped with a full Shimano 600 Ultegra groupset) 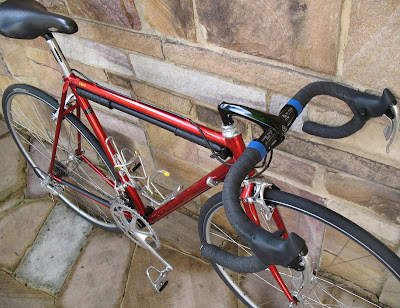 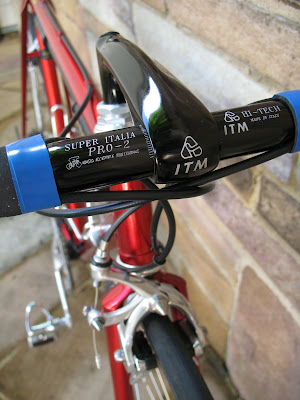 Hi-tech towards the end of the last century

Her frame is made from Columbus MS (multishape) tubing built tight with a 955mm wheelbase. The handling was best described as frisky but made more manageable with a long 125mm stem. A big drop from saddle to hooks allowed me to stretch out over the frame and drop my profile into the wind. Not the flashiest nor the lightest bike but solid, dependable and (at the time, and to me at least) fast. And I was deeply attached to her. 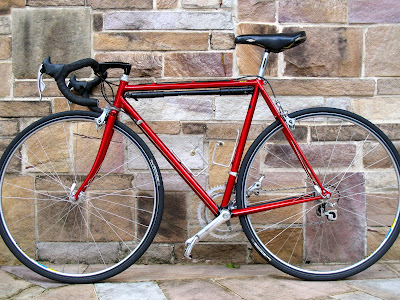 A pursuit-style drop from seat tube to a short head tube would have marked this out as a performance machine in the 80s and early 90s. Interesting to see how the shape of modern bikes have morphed to be almost exactly opposite to this. The seat tube has a shallow angle allowing the saddle to be positioned a fair way behind the BB despite the small frame size. And yes, I was a bit more flexible back in them days. (also check out the tapered seat tube which accepts a 25mm seatpost otherwise only seen in bonded aluminium bikes in the 80s-early 90s) 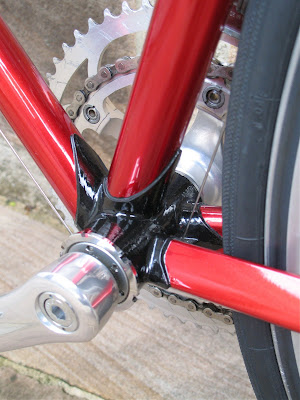 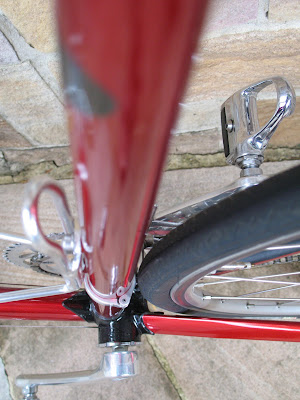 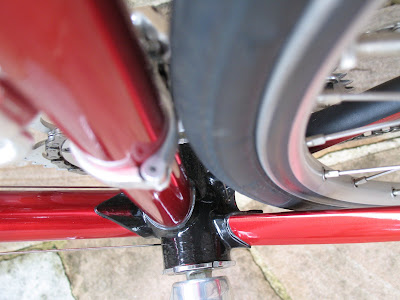 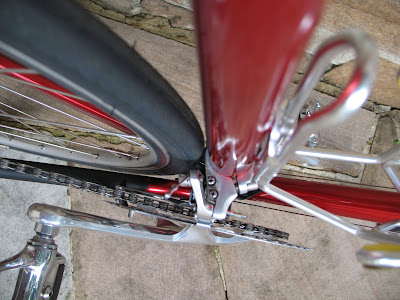 And the rounded drive-side chain stay 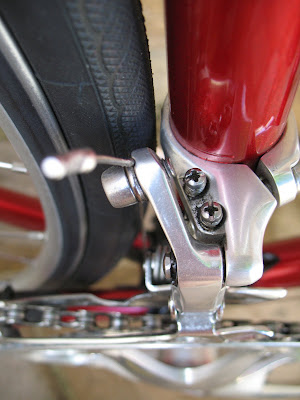 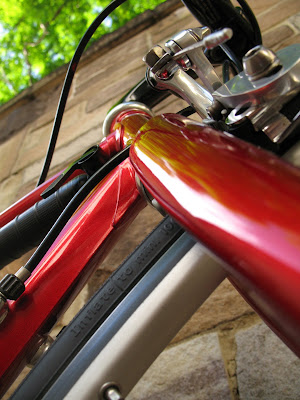 The tear drop down tube

After about 15,000km I updated her almost to the point where she is today (as pictured). A (uninspired) metallic paint job at a panel beating yard, a second bidon mount on the seat tube (drilled a little skewiff), and a full 1993 Campagnolo Chorus groupset with an early Chris King Gripnut headset (an expensive option to replace the low stack-height Ultegra unit). 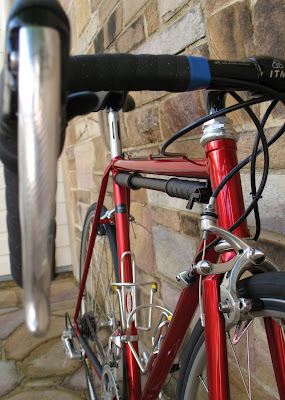 Second generation Ergopower (same model for Record and Chorus in 1993) 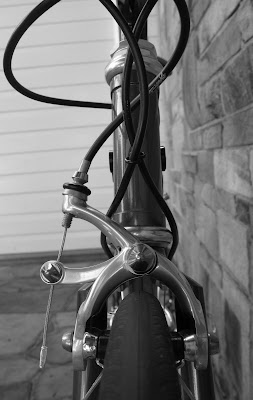 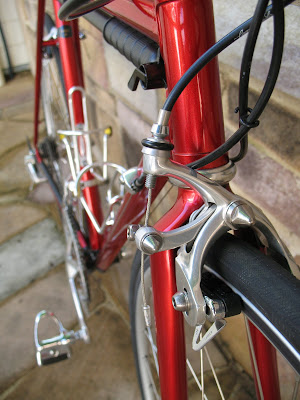 Last generation for the Chorus monoplanars 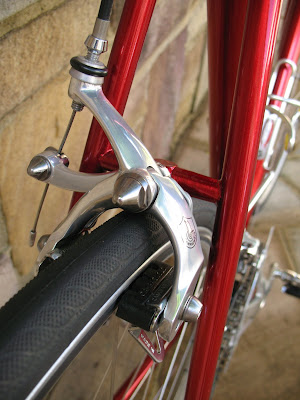 IMO the second most beautiful caliper after the deltas 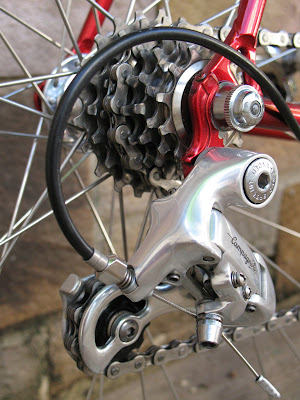 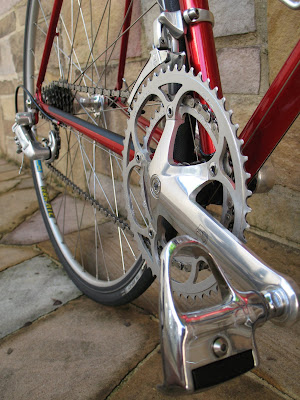 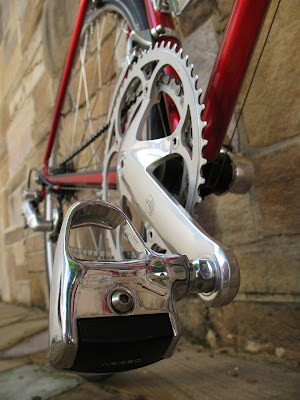 But our focus often changes over time. I started to get more serious about racing, and almost instantly the first wife was retired as a newer model appeared on the horizon. And so the sequence of (predominantly but not always) monogamous bicycle relationships began. A Trek 5200 in 1994 (back onto Shimano Ultegra as well as a dabble at mountain-biking), then a Cannondale Saeco Team replica with Shimano Dura-Ace 7700 in 1997, a Giant with DA 7800 in 2003...


And then, for a variety of reasons (some real, and some imagined), I was unable to continue racing. Over this time my adult role for which I get paid transitioned from student to supposed expert and teacher. I had a business to run, staff to pay, professional relationships to maintain, rent and mortgage commitments... So the focus changed again, and at night (after adult commitments had been fulfilled), an ebay troll was born, nurtured and set free.
More importantly (to go back to that line about virgins discussing the finer points of sex), I learnt a great deal more about the lugged, steel, racing bicycles that I so desired when I first started racing as a youngster. A hoard of old magazines that have been thumbed through many a time were referenced to the explosion of information now available on the internet. Not to mention the growing number of artisan bicycles being produced and professionally photographed for all to admire. I always realised that my first wife had a somewhat rough edge to her (the inexpert is not necessarily blind) but the absence of finish work is breathtaking.
For those that are still reading: the following images may be disturbing to some viewers... 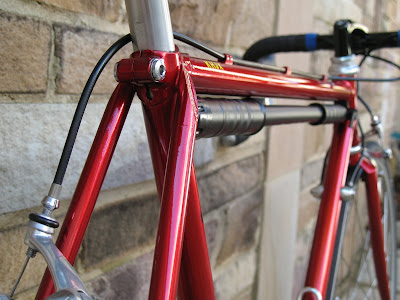 Note the flattened profile of the top tube. Poor finish on that seat stay to lug transition. 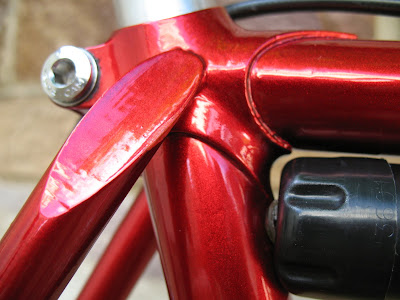 Rough work on that seat stay spoon and lug 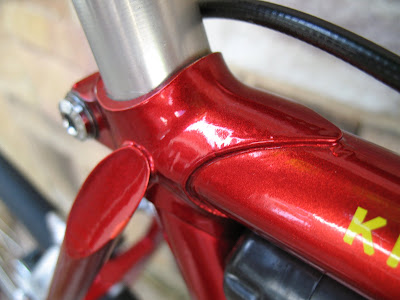 Now that is a sloppy shoreline. Uneven, under-filled, blobby. Not to mention that no attempts have been made to refine the lug (no shaping, no thinning, not even bothering to file off the castings)

It would be unfair to incorrectly recall this period of education. Somewhere between a newcomer's bewilderment and an old-timer's cynicism. I absolutely adored my first wife. I started racing because of her and my aesthetics and feel on the bicycle are moulded by my experiences with her. I would like to say that I was knowledgeable enough to know she had flaws and accepted her as she was. But I didn’t. That awareness came later. But that does not lessen my experience of her and I consider myself lucky to be able to continue a journey where a little novelty can still excite and a little knowledge can give comfort.
Then again, you know you are getting old when you spend more time looking backwards into the past than looking forwards to the future.
Back to AJ (finding old photos of her started this whole navel-gazing exercise). Yes, she had her flaws. And I had (and still have) many failings. But we had a few special moments in the brief time we were together and for that I am thankful. I will never be the same person that I am right now. Just as I am not the same person I was before. Experience changes us and the way we view the world. We live. We learn. And (thankfully, for most of us) we move on.
Yes, this is a self-indulgent trip to the vault of my memory. And a sentimental favourite of one person is a mere trifle.
Just realise: A sentimental favourite of many is an icon.
It’s a numbers thing... 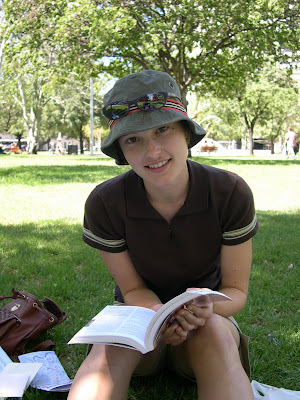 A different time and place

I have a full Columbus MS tube and lugset waiting to be built if you want to do it all over again. Mid-life crisis discounts available.

Thanks for the kind offer Joel. It’s not very often that one gets the opportunity to capitalise on a midlife crisis. I’ll let it ride for the moment so that some car salesman can have the opportunity rob me in the (near) future.

G'day,
Great Blog -
So there is another person that rode an M.S bike! I have a Frezoni built for me by Joe Cosgrove in 1990. It has a full C-record ensemble (Deltas of course)and is still the love of my life. I have just (literally three days ago) bought myself a new carbon / dura-ace wonder bike, it's nice and light and there's no doubt, everything works perfectly, (I wonder how long it will be before I stop reaching for the downtube everytime I go to shift gears?!)but I can't ever imagine just standing and staring at it like I used to (and occassionally still do) with my old faithful.
Cheers

G'day Chris. A fellow Australian on an Australian-made multishape is indeed a rare occurrence. All hail the powerful reach of the internet given that like-minded chaps with slightly skewiff sentiments can meet on an obscure blog!

I have a full multi shape llewellyn but need a roadie to match it up,
Very nice build im allso an aussie
daynegerous@hotmail.com