In the real world I’m known for my focus, determination, routine and near resolute inflexibility. Not particularly endearing traits. But for better or worse it has got me to where I am now.

Riding a single speed off-road is like looking the real world in the eye and saying “I defy your varying terrain”. And riding without suspension is simply pulling the proverbial finger after such a cockeyed statement. But nature bites back. Especially if you have the crap riding skills that I possess.

Today’s riding conditions were near perfect. Cool, overcast, dry with marginally damp compact soil, and to top that off, some angels had cleared the loose debris from most of the trails (got to love the volunteer maintenance guys & gals). So I thought I might ramp up the tire pressures so I could go just that bit faster (well faster than “what the f-k is down the track that’s holding us up...”). Right?

Wrong. Multiple taps, toe-downs, uncontrolled slides, bouncing descents, “what the f-k?!” falls, and nervous trepidation with resultant “ok, let’s just walk this section” made for a frustrating ride. Too slow to sustain any serious injury. Too messy to hit the pleasure zone. 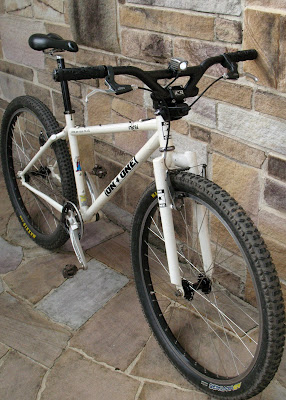 The bucking bronco at rest. Notice how clean she is after a 3 hour ride (ok maybe I walked about 1/2 hour of it - heck maybe more). But you should have seen the trails today - they were groomed to ride fast!

Halfway through the ride I realized that it wasn’t going to get any better without letting some air out to smooth the ride and gain some traction. But that would have meant compromise. And today was a day ruled by stubborn inflexibility. 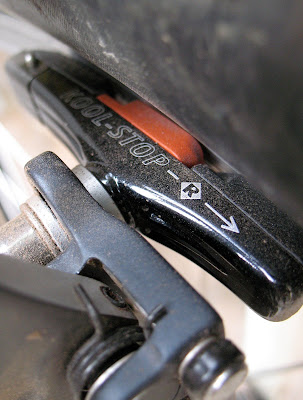 But I did bounce through the last technical descent. Clean. And knowing my nature, I’m probably going to try again.

Can you tell me what kind of bars those are?

Good question. Unfortunately I have no idea as they are not branded. It is made of TIG welded aluminium with a decent rise & width for single speed. Almost a cross between a BMX bar and a MTB riser bar