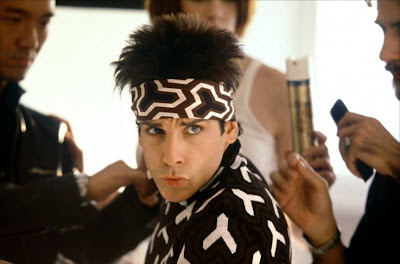 The troll has a desperate wish to be cool. But the practicalities of this defeats him. He lacks the personal attributes (apparently small and whimpering doesn’t cut), is unable to find, much less maintain the company of cool people, is clueless on the latest trends, and is too much of a cheapskate to buy into it.

Despite the appearance of casual ease, being cool simply takes too much effort.

But, on occasion, someone else does the work for you. Then drops it in your lap. 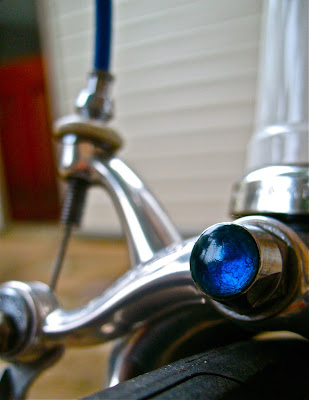 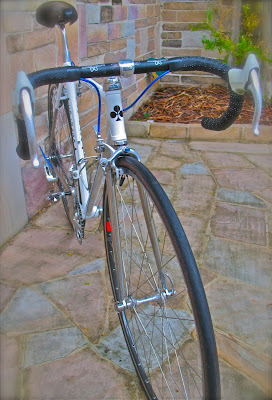 She followed the ebay troll home...

If necessity is the mother of invention then the Cobalto brakeset was an opportune stroke of marketing genius.

Soon after C Record’s glorious debut in 1985 the first generation delta calipers were pulled off the market because of alleged concerns with the cable clamping bolt (the fact that the whole concept was flawed took a little longer to work out). In 1986 Campagnolo came up with a brilliant plan: take the Super Record calipers (that were still in production), modify the mounting bolt to set a blue plastic “jewel” at its centre, paint the Campagnolo script in a matching blue, match the rubber rings of the cable adjusters to the grey-white hoods on the existing C Record levers, call them “Cobalto” brakes and quietly slip them into the C Record (Record Corsa) groupset. 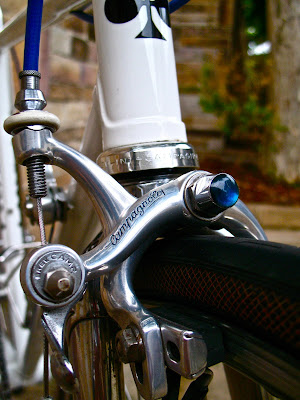 As pretty a decoration as any hard-nosed racer would dare to place on his steed... 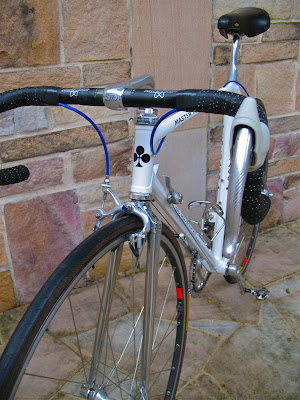 Clean lines. These were the first levers that Campagnolo offered with an aero option. And yes, they were the same levers that pulled up (or at least attempted to pull up) 1st generation Campagnolo delta calipers. When Campagnolo brought out their second generation delta calipers in 1987 the cable quick release moved to the lever (a technical quirk that continues to this day). Pull up the rubber skirt on your modern lever and I bet you'll find that the body ain't made of metal like these babies... 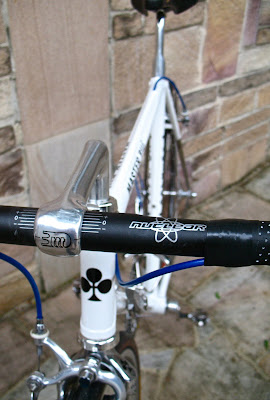 Hmmm. I don’t recall this brand of handlebar back in the 80s. 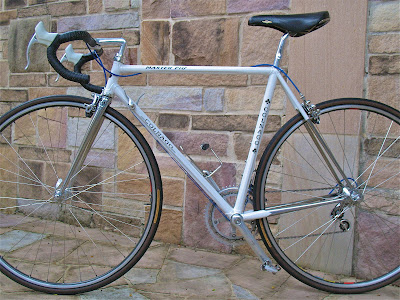 That’s a long reach to them levers there gov’ner. I guess pre-ergonomic levers and ergonomic bars aren’t such a practical combination (unless you go by the nickname “horse”).

Catching a bicycle of this calibre on the troll’s limited budget is like going out to fish for minnow and coming home hauling a marlin. Is the troll worthy? Probably not. But the troll has observed that repainted Colnago’s usually do not generate much interest. Even more so if the respray is in plain white and wholly unsympathetic to the original. The Colnago Master is typically remembered for the legendary name, the wonderful ride, and the fancy paint job. Take away the paint and you still have the name and ride for sure but it is no longer recognisable as a “Colnago Master”. And confused consumers don’t tend to stump up with the cash.

In addition, Australians, being practical people, really don’t have too much time for something as esoteric as Campagnolo’s C Record group. If it’s heavy, outdated and clunky then the question arises “What’s the point?”. Followed by “How much?”. Then “That much for a bloody bicycle?”. Then “Tell him he’s dreaming!”

But the troll has always been drawn to shiny bicycle bits. And C Record certainly has plenty of that. The Cobalto brakeset with the electric blue cable wrap, well, that’s just the ducks nuts, the bees knees, the cats meow...

This bike has the look. The look of blue steel... 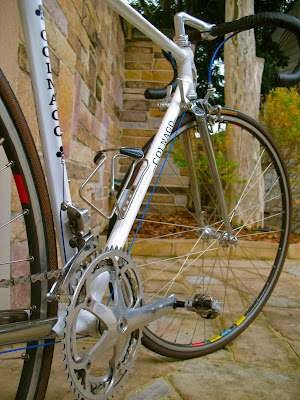 It’s nice to spend a bit of time back on friction shifters especially with a full complement of shiny C Record bits. (And yes, those are double-sided Shimano SPD pedals. And no, I don’t care what the purists think. Surely, with my pitiful riding ability, baggy shorts, unmatched clothing, and light dongle on my helmet, scorn will find its attention drawn elsewhere) 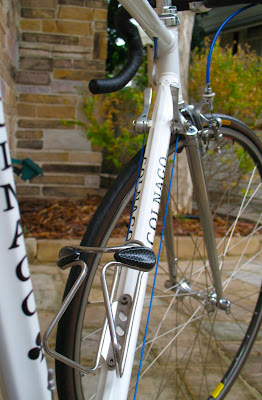 Great choice of bottle cage by the previous owner. Like the handlebar it's a modern generic copy, but not at all out of place on this build. 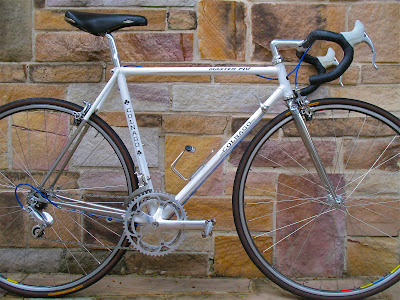 To quote Derek Zoolander: “Have you ever wondered if there was more to life, other than being really, really, ridiculously good looking?” Answer: No. (Well ok, beauty is in the eye of the beholder and many Colnago followers will probably find this repaint a little unsettling. Logos, lug details, and colour choice are certainly not typical of a Colnago Master. But the electric blue cabling is very clever indeed. Should the troll tire of it I guess he could go over the frame with coloured crayon.) 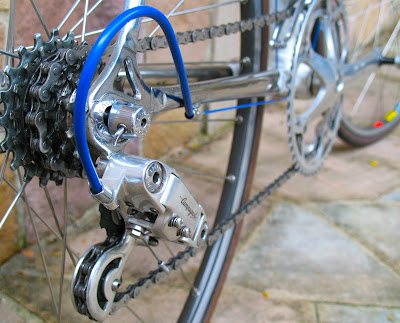 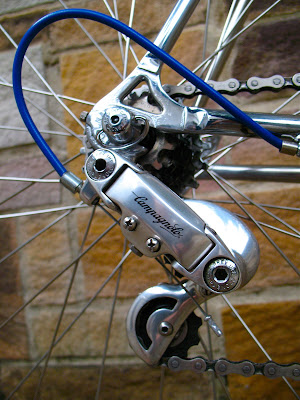 The C Record rear derailleur "... so well made that it will continue to shift badly forever...” 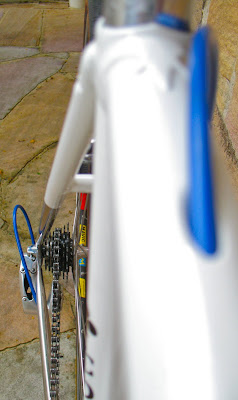 Last time a rode a block this tight I was young, fit, and self-assured. Time to swap out the freewheel. 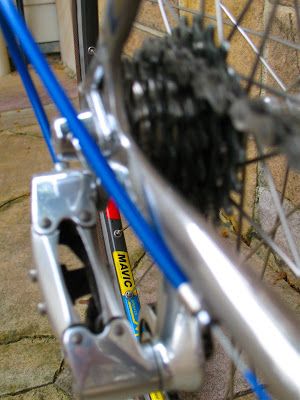 Mavic Open 4CD’s. The first 400g clincher rim that didn’t pretzel on you when you turned a corner. 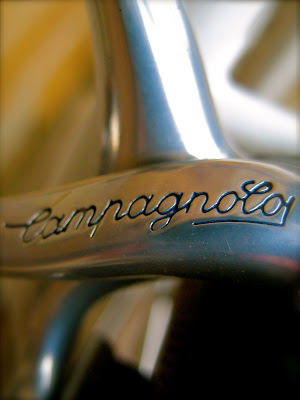 Blue steel. Surely a look that has no peer. 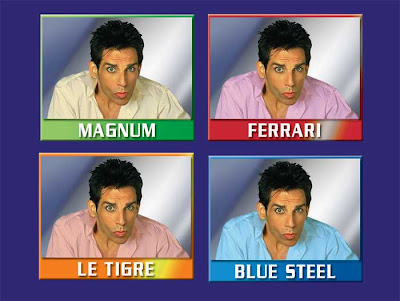 You wrote: "In 1986 Campagnolo came up with a brilliant plan: take the Super Record calipers (that were still in production), modify the mounting bolt to set a blue plastic “jewel” at its centre..."

It is actually better than that. They used the mounting bolts from the 50th Anniversary brakes and substituted the blue plastic jewel for the gold seal.

Thanks Chuck. And the troll thought that it couldn't possibly get any better * sigh * ...