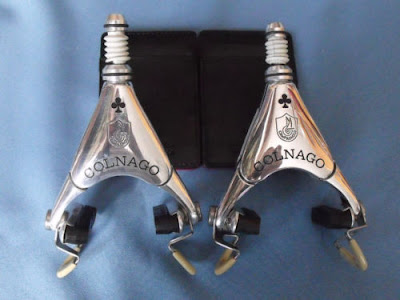 The 2nd generation bodies are wider than the first generation and enclose the standard 3-pivot mechanism (ok 4-pivot if you include the cable-locking bolt). There is no retaining clip on the underside and the faceplate is released by lifting the spring-loaded cable tensioner at the top. 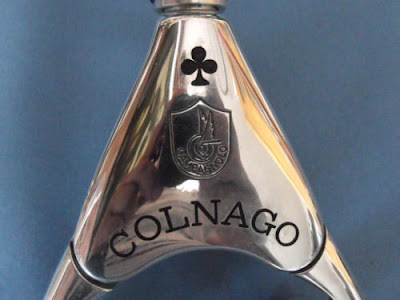 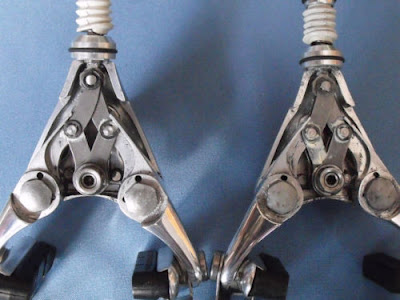 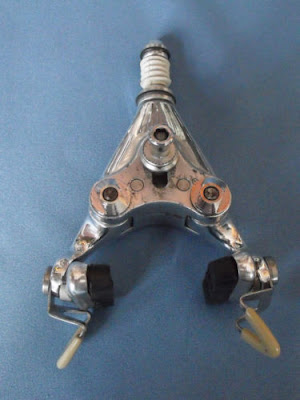 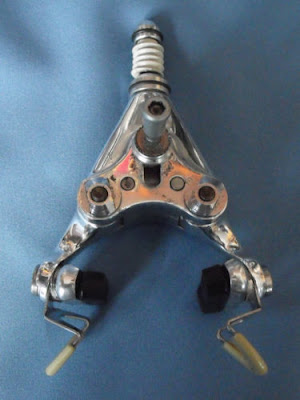 The ebay troll hasn’t stumbled across an example like this before and any further information is appreciated. In the meantime the troll will investigate the identity of the Mr “Colnago” brazen enough to pantograph his name onto such a rare faceplate.

Ugly but I rather like the concept of riding my armchair. And it must have worked otherwise the UCI wouldn't have banned it. Cooler and also illegal is this Concor Sprint for sale via Hilary Stone (and to think you get all that support for only £65...) http://hilarystone.com/images/sale%20images/saddles/Condor-Sprint.jpg

I won a set of these off 'bicisteve' in hungary. When I first saw that they were not the usual colnago stickers my heart just fluttered! They are very well pantographed and although I did'nt ask him, I suspect he has a old man in a cave somewhere with a early pantograph machine, as colnago never officialy commissioned anyone to pantograph deltas in this format. The logo has been struck by a die to be formed, so would have had to be done by a well equipped workshop. Finding genuine pantographed old stock used to be a exilarating quest, but there seems to be a brave few that have decided to reinstate the old machines and train themselves in the black art of pantographing for purposes of turning bland standard parts into pretty logo'd unique items. It will change and somewhat devalue all old pantographing as it will become hard to work out original factory commissioned from modified old stock. Sad but true! megabenzo.

Thanks for the info megabenzo. So you are saying that the Campagnolo winged-wheel logo (as opposed to the Colnago pantographing) was stamped after production at some workshop? If so it would be a damn shame for the five or six people in the world who care about these things...

My investigation of this particular brake set (the face plates) shows a post production effort in modification. All done very expertly. When viewed with magnification the logo has no furry edges, (pantografing will reveal a deep rough etched edge look). But the real giveaway is the slight remnance of the original lazered winged wheel logo that was used as a template before stricking. It is just visible having been almost all polished away first. It's a lovely brake set and it takes pride of place in amongst a campagnolo script pantographed delta with chevrons I have, these I also suspect were a recent pantographing, coming from ebayer 'lelo 72'in italy who has been a constant source of never before seen unique pantographed campag bling. 'GTS753'in byron bay has been pantographing campagnolo gear levers for a year now, having spent years setting up and practicing the art of pantographing he has gone into production of many popular italian brand names on the levers,(seems to have a cache of blancs). The uniqueness of rare pantographed items may be affected by all this, but keep in mind, rare parts from the 70's and 80's(the peak pantographing period) don't grow on trees and are not that easy to find. So 'Pirate pantographing' can only be limited to small numbers of hard to get items. Megabenzo.

Shucks that's a shame. I'm sure the buyer will still be happy with his rare purchase all the same. Greg has an excellent store of reproduction decals and an awe-inspiring collection of bicycles and componentry, I just wasn't aware of the extent of his craft. Thanks for the great info megabenzo.

Hi Wingnut,
I'm interested in using one of your pictures in a book and would like to contact you about that privately. Perhaps you would kindly email me at mail@hadland.net.
Cheers,
Tony