I stopped racing in 2004 and since then I have become somewhat complacent about riding and training in general. Although I do not plan to race, I’ve decided to buy a new race-quality bicycle partly because it was real cheap on ebay (half price and genuinely “just ridden down the road”) and partly because I have aspirations to returning to proper riding. Also my cycling buddy is going overseas for three weeks with his family and it may well be time to do some secret training miles so I can kick his sorry ass when he comes back with white, skinny, untrained legs. (yes, it’s the same chap who now owns the Columbine and no, I’m no longer jealous. Well, maybe just a little...) 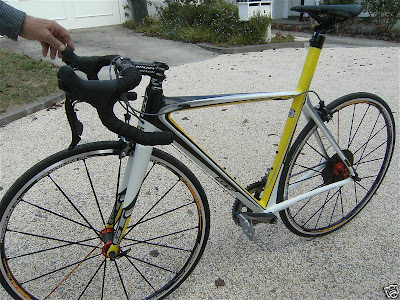 Only ridden up the road. Honest... 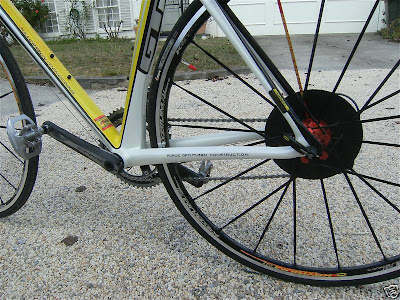 Interesting choice of pedals suggest that this bike has not been used for racing. Note the immaculate rim surface and spoke protector in-situ. Eagle eyes will also notice that the chain is inside out and the masterlink (sitting just behind the chainring) is upside down...

The GTR Team Carbon has a high spec. A full carbon frame with integrated seat post and tapered carbon fork, full Shimano 6900 Dura-Ace groupset and Mavic Ksyrium SL wheels. The ride has been described as “neutral” and “stable” (cycle speak for a bit flexible) in contrast to unforgivingly rigid like so many top-end race bikes ridden by seasoned professionals and purchased by inspired, well-heeled novices. Being skinny, weak, and of soft constitution, flexible suits my style of riding perfectly.

The world has changed a lot since my collection of steel lugged bicycles ruled the roads. Broadly speaking, over the past 50 years the focal point of bicycle and component manufacturing has shifted from Italy to Japan to Taiwan, and now to China. Materials have changed and technology has advanced. This means that bicycles are getting better (lighter, better manipulation of ride characteristics, cleaner shifting, good brake modulation etc) and so has the manufacturing process (ie the ability to mass-produce). Overall this means we get better stuff for less money. 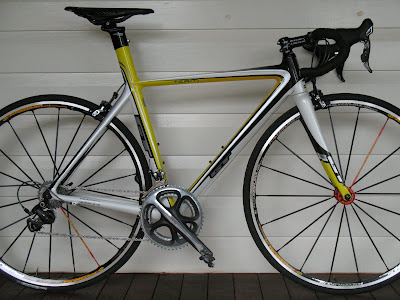 Seat mast and fork steerer cut down to size. Just waiting for a 110mm stem to arrive from Wiggle. And all this for less coin than what the groupset and wheels would cost through the internet.

First up, this bike looks great. It carries the GT moniker which harkens back to the days when they were a force to be reckoned with in BMX and mountain bikes. In 1998 the company merged with another iconic American company, Schwinn, then they both went bankrupt in 2001. GT is now part of Dorel Industries*. What’s significant is that GT was never known for their road bikes and have no pretensions as such. IMHO pedigree carries little weight for production carbon road bicycles now that the vast majority are made in the far East regardless of the branding on the tubes**. I like the fact that the moniker this bike wears is an icon yet just a little left of centre field

That said, this example is right up to date for current, readily available technology. Internal headsets and ahead-set style steerers are lighter and allow for a more rigid front end (not to mention the tapered steerer). An integrated seat mast reduces weight and fine-tunes the ride characteristics (and looks fantastic). But better technology does not equate to better in all areas. The seat mast and steerer have to be cut down to fit the rider. Once they are cut then the bike becomes “customised”. That means that it probably won’t fit another rider unless they are my dimensions. In any case the carbon frame probably won’t last the test of time (although I suspect it would be out of date/ out of fashion before it wears out). Sure it’s my bike, but I suspect I won’t be passing it down to my kids. 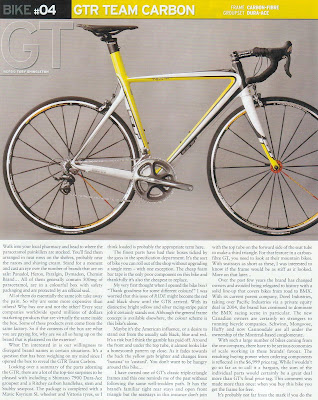 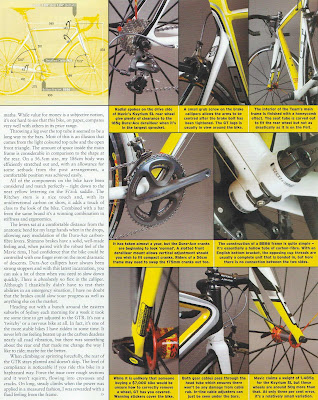 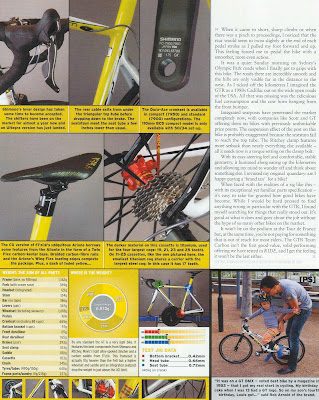 As technology leads to improvements in some areas it often comes at a cost in other areas. It simply depends on what is more important to the customer. Easier to maintain cartridge bearings and the vogue for labarinthine seals means greater drag for wheels and bottom brackets. Great for our busy world where maintenance is a dirty and time-demanding word. Yet, I remember a time when Campagnolo wheels used to sell on their ability to (seemingly) spin forever. My how things have changed.

The bicycle chain is yet another example. They used to be simple, durable (I used to get 10,000 km on a well-maintained 8spd Rohloff SLT-99 chain) and weigh a ton. Now they come made for specific drivetrains with specific inner and outer sides and a masterlink to allow easier maintenance. High-tech optimization of performance parameters. Yet it is interesting to see how many of these chains are mounted the wrong way round. Not paying attention to detail can compromise performance in the setting of almost-certain technological victory. And although these fancy chains are much lighter they also wear out (stretch) a good deal quicker.

In so many ways we are better off now than we have been in the past. We live longer, enjoy a higher standard of living, possess more consumer goods than ever before, have greater access to information and education, and are able to avail ourselves to an ever expanding realm of possibilities. But in life, everything (outside of the basic necessities) comes at a cost. The most favourable improvements are selected and compromises accepted either disclosed or undisclosed. Just don't expect the next generation to necessarily hold the same values.

Who cared in 1995 when Campagnolo replaced their C Record groupset that they stopped polishing the inner crank arms (because nobody looks there) and started labelling the groupsets in the place of their winged wheel logo (to follow the successful marketing of the Japanese groupsets)? Well I, for one, did.

** Again I’m in the minority here. Take a look at all the Pinarello fans out there with their fancy and expensive rigs. The fact that they are made in Taiwan and “only” painted and assembled in Italy brings raucous protest. Actually I’m more concerned about the fact that the assembly process is done in Italy - have you ever disembarked and tried to collect baggage at the international airport in Rome? On the other hand, the Taiwanese are as good as it gets with carbon fibre manufacturing (even if the odd attention to detail gets missed...).

Hi,
nice bike and a good blog to read.
So close to buying one... what do you think of the bike now you've had it for a little while? i read a few places about the paint job fading. What are your thoughts.

Thanks in advance.
/Mazen

Hi Mazen,
The GTR is a good bike and the current setup is a magnitude better than the obsolete technology that I prefer to collect. It probably is a little flexible and has a slightly "dead" feel characteristic of carbon bikes in general, then again it is light and dampens road corrugations well. Is as good as a top end Pinarello or Colnago, or for that matter, the latest generation of "pro level" carbon bikes released by Giant? Probably not. But, just as a $20K bike won't win you a C grade race, this setup ain't gonna hold you back in A grade. The paint on my bike (kept indoors) appears fine. Cheers & good luck in your decision