Funny how things turn out the way they do.

When I started running the hills around my area it was with the expressed purpose of slowing down my cadence and increasing my strength in preparation to ride a single speed bicycle off road. And it seemed to work before life became a bit busy. It’s been some time since I have ridden my single speed. Indeed, it’s been quite some time since I pushed down on anything resembling a bicycle pedal. Yet I continue to run.

Print Unable 32. A flashing error message that mocks me. I turn the machine off then on again. The error message disappears. But only briefly. A couple of prints later and it returns. Laughing at a clumsy attempt to rectify the problem by simply wishing it away. I flick the switch a couple more times but this printer has an ability to learn. It will not allow such a simple trick to work again. This is a machine so complex that it knows itself. And it knows that I can’t possibly hope to understand its evil machinations.

Print Unable 32. I look it up on the internet. Because everything is on the internet. I go through the recommended sequence of steps and check the paper feed, and the drum unit, and the other printing whatnots. I turn the machine back on. Print Unable 32. I do the same sequence of steps another three times. I check a youtube video which shows how to block the toner sensor with a piece of tape. I open the printer but it’s a different model to that in the video. If there is such a sensor then it is hidden behind a plate clenched tight like an iron fist. I despair. Print Unable 32. The LCD display laughs at my feeble attempts to comprehend the incalculably complex.

Defeat. But it is easy to find the manufacturer’s service manual on the internet. It indicates that if cleaning the unit doesn’t work then one of three components needs replacing. To my delight, I find that I had purchased an extended warranty for the printer. I call the company the next day. They tell me to bring the printer in and they will replace it.

Not fix it. Replace it.

This isn’t some $79 plastic printer. This is a $1200 plastic “multifunction centre”. According to the manufacturer’s service manual it just needs one (or all) of three parts replaced. Maybe the parts can’t be sourced any more. But it was a current model just a couple of years ago. Maybe the cost of labour in Australia is too prohibitive. I watch Kevin McCloud’s “Grand Designs” and see, with some disappointment, that it will cost me more to renovate my little wooden house in Brisbane than what it cost to resurrect a stone castle in Yorkshire. Not an igloo in Greenland or a yurt on the Mongolian highlands but a castle in England (and under the close supervision of archeologists from English Heritage paid for by the owner). Maybe after replacing parts and servicing costs and the printer still doesn’t work. What then? Well, whatever it is, the insurers have calculated that it is cheaper to replace the item rather than getting it fixed.

Machines have reached a degree of complexity and technological evanescence that the economics of globalisation and mass-production make them (relatively) cheap to manufacture but expensive (or impractical) to maintain. Australia places a high price for labour. Manufacturing that is mobile (building renovations isn’t one of them) moves overseas or kills itself at home.

I read Heather Pringle’s article on the evolution of creativity in the Scientific American (March 2013). I learn that the oldest known stone tool was knapped by an australopithecine in Ethiopia some 2.6 million years ago. And that modern Homo sapiens emerged about 200,000 years ago. But nothing much happens for the first 100,000 years. Then archeologists find projectile weapons, insect repellent bedding, wind instruments, cave paintings, and figurative art dating between 90-60,000 years ago in Africa and 40,000 years ago in Europe (the difference presumably reflecting hominid migration). This suggests that the hand-held stone tool was, quite literally, the cutting edge of technology for at least the first 2.5 million years (assuming that archeologists took the time to dig just that bit deeper to make sure they didn’t miss anything in the African strata made by humans dating between 200,000-100,000 years ago). Any evidence of progress beyond the crude lithic reduction of rock dates from the most recent 100,000 years. Archeologist see an exponential growth of creativity. Anthropologists see an example of cultural ratcheting. 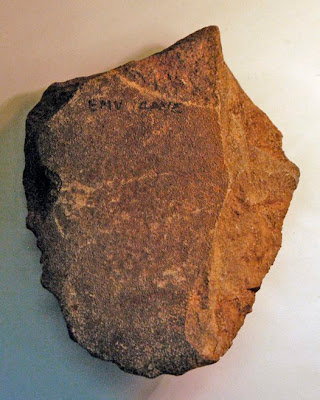 Palp this piece of lithic reduction

Over a couple of million years the hominid brain increased in size (Australopithecine had a mean capacity of 450 cubic cm; H. erectus 930 cubic cm; H. sapiens from 100,000 years ago 1,330 cubic cm) and specialisation (in areas that govern creativity where the free association of ideas then processes through analytic thought, and in areas that govern complex social behaviour such as language and empathy). The study by Dean et al outlined in the article shows that humans (with their big, specialised brain) also have a great ability to collaborate. Nursery school children, as opposed to chimpanzees and capuchin monkeys, can successfully tackle increasingly complex tasks by talking, encouraging and teaching each other.

Ms Pringle reports that the modern human with his cognitive power, social skills, and capacity to collaborate had in place the essential elements for cultural racheting. But it was demography (specifically the establishment of large, connected populations) that spurred the leap in creativity seen over the past 100,000 years. The sharing and development of ideas as people interact is taken as an essential and potent driver of progress. A process that continues to ramp during the internet epoch of a super-connected world.

My mind pictures an unstoppable logarithmic curve of progress. And a human desire to have more of everything. It leaves me wondering whether such a thing is sustainable.

Print Unable 32. I contemplate the convenience and ridiculousness of having such a sophisticated multifunction centre in my little home office.

I read Michael Marshall’s article in the New Scientist (No 2906, 2 March 2013). I learn that the global surface temperature has increased by 0.8˚C since the early 20th century and even if humanity stopped all emissions immediately the air temperature will still rise by another 0.3˚C. That means we are committed to at least a 1.1˚C rise. Mr Marshall reports that in 2007 the Arctic sea ice reached a new, less stable state. The question he puts forward is whether a further rise in temperature will reach other tipping points (the thawing of the Siberian permafrost is next in line) which could then lead to a cascade of global warming. 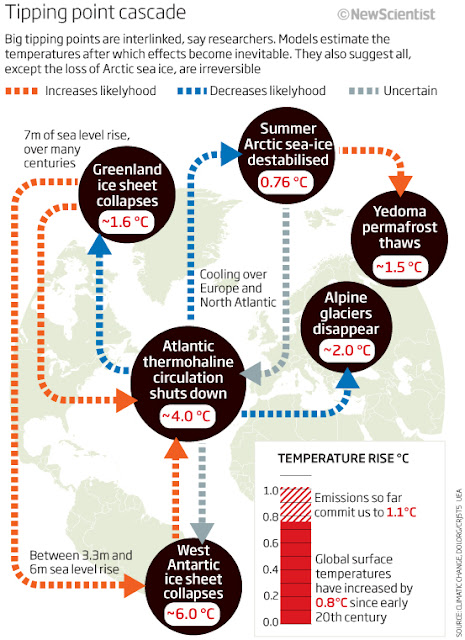 Variations in the Arctic sea ice, especially its recorded downward trend, is a reasonable cause of consternation. Indeed, for many it is the poster child of global warming. And global warming is not a good thing. Those that delve in the bafflingly complex study of the Earth's climate seem to agree that whilst the area (and volume) of Arctic sea ice has varied significantly over thousands of years it does appear to have become more unstable over the past few years. The study by Lenton and Levermann outlined in Mr Marshall’s article does not say that the melting of Arctic sea ice is itself a tipping point (Levermann states the situation is reversible) but proposes how this and some globally-significant tipping points (which they say aren’t reversible) can affect each other in ways not previously factored in climate models.

Proposals for nonlinear catastrophic events justifiably draws criticism from the scientific community. Complex systems have homeostatic mechanisms to isolate threats and smooth out fluctuations. But the significance of the study is not whether you necessarily believe in tipping points that can cascade into each other as discussed in a recent article in the Scientific American. It presents the reasonable possibility that such cascades may actually exist. And that matters. Climate science is not exact: any particular event can lead to change that is not entirely predictable so any irreversible event becomes highly significant. And calamity does not reside solely at the extreme end of fuzzy forecasts. As outlined in another recent piece in The Economist, when it comes to global warming two things should continue to concern humanity: the degree of uncertainty and the fact that, in practice, not much has been done to mitigate it.

Print Unable 32. I wonder about my carbon footprint. And that of my neighbours. Elsewhere a mass of humanity heaves itself up to the comfort and convenience of the carbon-intensive lifestyle we take for granted.

I go for a run and plan out what I need to do. I remember I have to sort out some stuff at my mum’s place now that she is away visiting relatives. And there’s still some tax papers to scan and some renovation plans to sign off. Then I have to go to work.

It’s going to be another busy day.

The replacement printer rumbles to life.

The real question, I think, is whether it is better to be a liberal who worries and spends our remaining years suffering as we decline or a conservative who doesn't believe in climate change and becomes toast with a smile on their face?