My favourite bike at this point in time is a 2002 On One single speed. Nothing rewards & punishes as much as riding a single speed off-road (except maybe riding off-road on a fixie). The frame appears to have been made in China (or Taiwan) and the welds aren’t super clean, certainly not to the standard seen on some custom boutique frames. But the frame is bombproof and the geometry spot on. Long in the top tube and short in the seat tube for superb handling. No suspension for added simplicity. The geometry of this older frame does not accommodate suspension forks (unlike the current On One frames) allowing massive clearance of the top tube. A riser bar puts the handlebars to the same level as the saddle allowing for perfect weight distribution and balance. Keep long and loose to let your body float over the frame. Grunt & grind as the single track steepens skywards without the unnecessary bounce of a suspension fork. Massive clearance for 23mm+ tyres front and back allows you to roll over the majority of obstacles. No disc brake bosses as single speeds without suspension don’t need them. A BMX for grown-ups. Love it. 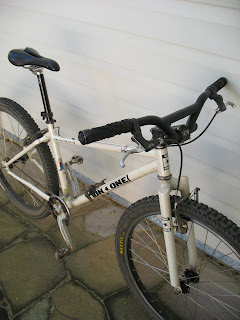